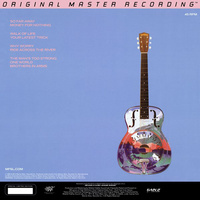 The sense of realism this edition delivers will leave slack-jawed even the most hard-to-please audiophiles. As the recipient of the Grammy for Best-Engineered Recording, the album has always been a go-to sonic standard, but never has it sounded so reach-out-and-touch-it realistic as it does on this analog pressing. All of the hallmark characteristics – ample spaciousness, ideal balances, widescreen dynamics, immersive depth, lush production – are here in spades. As is music-making of enviable proportions. Perfection abounds, not only in the manner in which the band nails its pop hooks and uptempo boogies with debonair flair – but also in the control room. Iconic session jazz drummer Omar Hakim supplies fluid beats and solid rhythmic foundations while Knopfler and Co. comb over grooves so smooth it seems that they're made of honey butter. Dire Straits would never play with such effortless again.