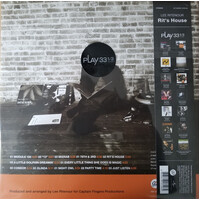 Creatively, Lee Ritenour has had his ups and downs over the years. Many of the guitarist's commercial pop-jazz efforts have wasted his skills as an improviser; when Ritenour is catering to NAC/smooth jazz radio, improvisation is the usually the first thing to go. But when Ritenour does have a chance to stretch out, he can be an appealing improviser. Although quite accessible, "Rit's House" is among his more memorable and substantial efforts. This 2002 release has a soul-jazz/post-bop outlook that often recalls the late '60s and early '70s; for the most part, it is the sort of album that guitarist Grant Green would have been comfortable recording during that era. But Ritenour's guitar playing owes a lot more to Wes Montgomery, who is obviously his primary influence on Gabor Szabo's "Mizrab", as well as original tunes like "78th & 3rd" (which features organist Joey DeFrancesco) and the dusky "Olinda". One of the album's best tracks has nothing to do with jazz: "Every Little Thing She Does Is Magic". Featuring former Doobie Brothers vocalist Michael McDonald, this interesting remake of the Police's 1981 hit is not only a departure from the rest of the album -- it is also a big departure from the original version. While the Police's version was up-tempo pop/rock, Ritenour and McDonald transform "Every Little Thing She Does Is Magic" into an adult contemporary/quiet storm ballad. That track is the album's only vocal offering; the rest of Rit's House is instrumental. Arguably, 1992's "Wes Bound" is still Ritenour's best studio album -- certainly from a jazz perspective. But this album is also respectable, and those who enjoyed hearing the guitarist stretching out on that mostly straightahead disc will also find a lot to enjoy about "Rit's House".