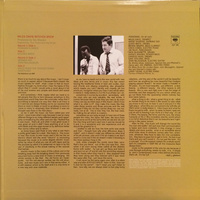 Gathering a Hall of Fame-worthy lineup of musicians and tweaking it according to his desires, Davis follows through on his idea to “put together the greatest rock and roll band you ever heard” on Bitches Brew. Central to his proposition is the presence of two (and sometimes three) drummers and two bassists, a tactical move that thrusts rhythms into a central focus. Akin to the futuristic album cover art, the drum-driven suites head toward distant universes and uncharted territories—at once hypnotizing and grooving, charting maverick adventures with quixotic rock, funk, and R&B elements.
Conceptually, Davis described Bitches Brew as “a novel without words” and “an incredible journey of pain, joy, sorrow, hate, passion, and love.” The vast psychedelic expanses of warped echoes, liquid reverb, and tape loops confirm such ambitious contrasts of light and dark, fear and hope. Yet the most absolute characteristic of this watershed effort lies in how it resists definitive interpretation and encourages free thought—the very principles with which Davis conceived the everlasting beauty and fascination that is Bitches Brew.