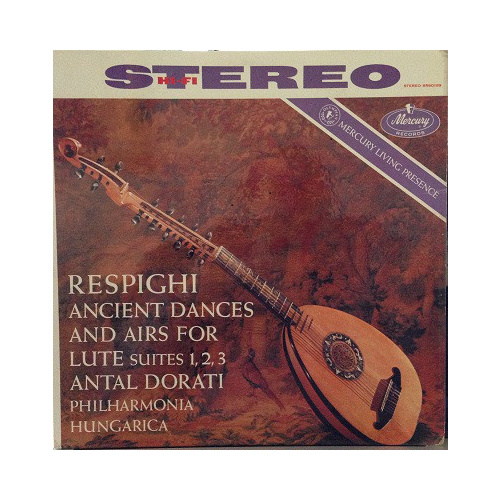 Respighi: Ancient Airs And Dances For Lute And Orchestra (LP)

Ottorino Respighi: Ancient Airs And Dances For Lute And Orchestra Suites Nos. 1, 2, and 3 - The Philharmona Hungarica conducted by Antal Dorati

The common practice in concert houses today of performing early music on modern orchestral instruments is owed largely to the endeavours of Ottorino Respighi. His free transcription of Renaissance works for the lute (1932) opened up the way to the rediscovery of forgotten rhythms and timbres. Although Respighi altered the structure of the music by dissecting phrases right down to their basic elements, re-ordering them and redefining their sonority by the use of heavy brass and timpani, the art of the ancient maestri remained unscathed. Cadences and harmonic idioms are given a modern colouring at the most, but are never destroyed.
Antal Dorati and his famous Philharmonia Hungarica have all that is needed to bring the score to life. Even in opulent passages the individual instruments can be heard distinctly, and clearly defined one from one another. This works particularly well in the first two suites in which each movement is treated to a process of refinement by means of differing orchestration. That the third suite, written purely for stringed instruments, soars away just like the proverbial Aeolian harp is only to be expected from this orchestra.