Bang a gong and get it on. At once sardonic, flamboyant, and trashy, T. Rex's uncommonly unique Electric Warrior catapulted leader Marc Bolan to stardom, triggered an ongoing fascination with glam rock, and launched a movement that soon involved David Bowie, Roxy Music, Mott the Hoople, and more. Yet none of those namesake artists ever released a record that out-glammed, out-innuendoed, out-thrusted, or out-camped Electric Warrior – named the 160th Greatest Album of All Time by Rolling Stone and included in the celebrated book 1001 Albums You Must Hear Before You Die.

Mastered on Mobile Fidelity's state-of-the-art mastering system, limited to 2,500 numbered copies, and housed in a gatefold mini-sleeve, the label's hybrid SACD gives the 1971 landmark the widescreen sound quality it has always deserved. Tony Visconti's warm, reverb-soaked production and Roy Thomas Baker's ace engineering remain two of the work's most famous and revered aspects. Here, the production and music can be experienced in all its full-tilt glory, from the subtle albeit elegant classical touches to the instantly identifiable Les Paul guitar licks to Bolan's sensual, wispy, are-they-or-aren't-they-serious vocals. 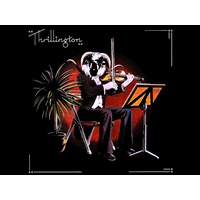