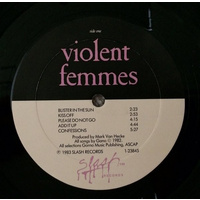 One of the most distinctive records of the early alternative movement and an enduring cult classic, Violent Femmes weds the geeky, child-man persona of Jonathan Richman and the tense, jittery, hyperactive feel of new wave in an unlikely context: raw, amateurish acoustic folk-rock. The music also owes something to the Modern Lovers' minimalism, but powered by Brian Ritchie's busy acoustic bass riffing and the urgency and wild abandon of punk rock, the Femmes forged a sound all their own. Still, the main reason Violent Femmes became the preferred soundtrack for the lives of many an angst-ridden teenager is lead singer and songwriter Gordon Gano. Naive and childish one minute, bitterly frustrated and rebellious the next, Gano's vocals perfectly captured the contradictions of adolescence and the difficulties of making the transition to adulthood. Clever lyrical flourishes didn't hurt either; while "Blister In the Sun" has deservedly become a standard, "Kiss Off"'s chant-along "count-up" section, "Add It Up"'s escalating "Why can't I get just one..." couplets, and "Gimme the Car"'s profanity-obscuring guitar bends ensured that Gano's intensely vulnerable confessions of despair and maladjustment came off as catchy and humorous as well. Even if the songwriting slips a bit on occasion, Gano's personality keeps the music engaging and compelling without overindulging in his seemingly willful naiveté. For the remainder of their career, the group would only approach this level in isolated moments.